Avintiv Media and CEO Jon Boles have long been known for being the go to resource for growing fitness brands with savvy digital marketing and highly regarded consulting. Today, Scottsdale Health has strengthened this notion as they have officially made Jon the cover of the August Issue, highlighting the CEO’s success with building world class fitness brands from the ground up. 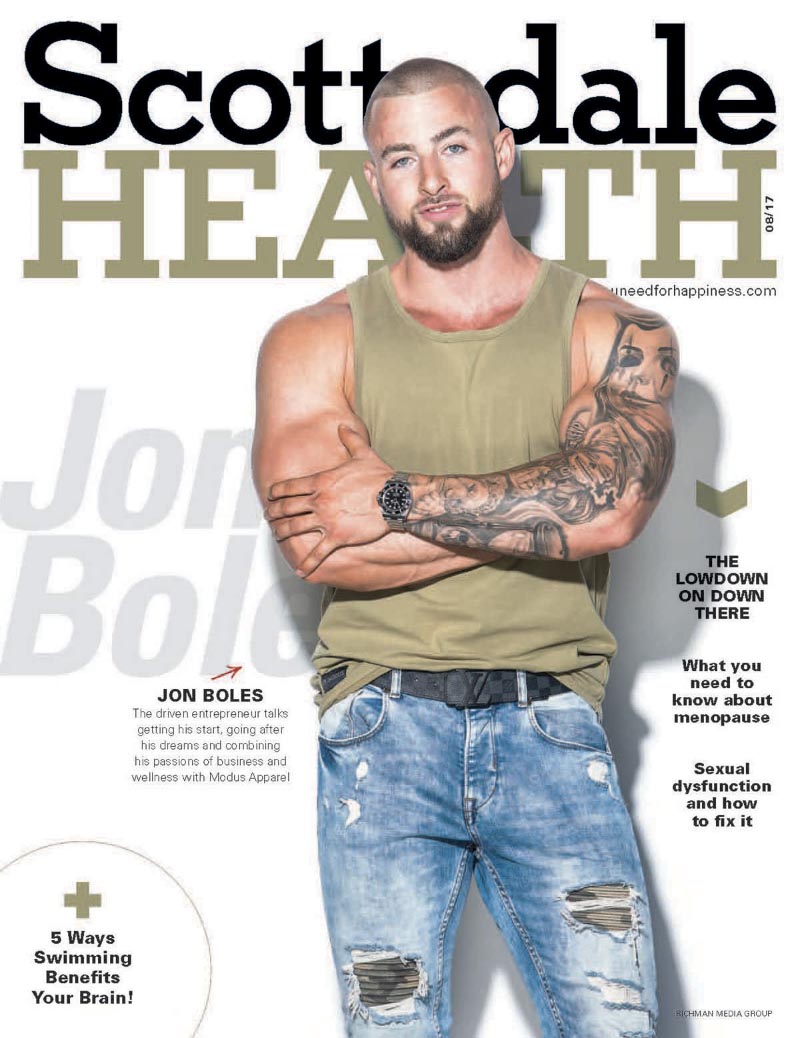 According to the Merriam-Webster definition, an entrepreneur is an individual who organizes, manages, and assumes the risks of a business or enterprise. The only thing missing from this definition is an example. Enter: Jon Boles. “My passion in life is creating things from scratch and being able to get ideas and businesses off the ground. When other people you’ve never met before come off the streets or through social media and tell you how your product or business has changed their life … there is no better feeling,” Jon Boles explains.

Jon Boles’ entrepreneurial spirit blossomed early in life. He recalls rummaging through his childhood home in Wisconsin to turn his gadgets and items into something brighter and better. His big ideas turned into inventions, and his inventions translated into sales pitches.

“My parents always said I was either going to be an actor – because I was good at sales – or self-employed. I’ve always been the kid/adult who wants to push boundaries and figure out the ‘why,’” he elaborates.

Jon Boles’ story began in Milwaukee, where he was a renowned trendsetter in the nightlife and hospitality industry. He was already promoting and managing nine of the city’s hottest nightclubs in his early 20s. His success quickly turned into local fame – patrons trying to schmooze their way into his special events and passerby frequently stopping him on the streets.

“I couldn’t go anywhere in the city without being recognized or stopped. I kind of freaked out and didn’t like it at first. [Being so young] and new to the spotlight was a lot to handle,” Jon Boles admits.

During his sophomore year of college,  Jon Boles launched Promo MKE, a premier event planning company based in his hometown. He initially established the company as a means to escape the limelight gained from his success in nightclubs.

“I thought if I hid behind a logo and a company that my identity would remain unknown as the owner, and I could get back to living a low-key lifestyle. That prompted me to learn about business inside and out, and I fell in love with it,” he explains.

In the past decade alone, Jon Boles has helped consult and build over 55 brands. While in Milwaukee, his primary focus was revitalizing failing companies.

“[Companies] would hire me to step in and redo their internal business, starting with each department and auditing where they needed help, finding their pain points and offering solutions to their problems,” he says.

Jon Boles’ entrepreneurial spirit didn’t stop with Promo MKE. His big ideas led him to open eight other brands in different industries, such as Avintiv Media (www.avintivmedia.com), a full-service digital marketing and media agency that is entrusted by prestigious brands, including Maserati, Ferrari and the likes.

Another one of his more recent ventures, and one that he says is his proudest business endeavor yet, is Modus Apparel (www.modusapparel.com) – a company that sells high-quality, stylish active wear. “Modus Apparel came to me over the years of built-up passion and frustration with fitness clothing. One day at the gym, it hit me [after] my tank ripped. I said, ‘Enough! I am going to start one of the best active wear brands in the industry.’”

Modus Apparel is dedicated to pursuing innovation, blending the best fabrics and constructing garments with one goal in mind: to meet the needs of customers’ everyday lifestyles. Items sold are meant to endure various types of workouts and fitness activities without compromising style. Customers will never experience Jon Boles’ greatest fear while working out … a ripped tank or torn leggings.

Eventually, the brand also led Jon Boles to another great adventure: Scottsdale. In July 2015, he relocated to Arizona after realizing that the majority of sales were emanating from the West Coast, and he never looked back.

“I absolutely love Arizona. I feel like I’ve lived here for over 10 years,” he says.

The brand – now sold worldwide – melds Jon Boles’ two passions: business and wellness. Admittedly, Jon Boles began working  out in college to gain attention from girls. Over time, however, the gym became his sanctuary. His dedication to health and physical fitness earned him a spot in the 2012 Men’s Physique Competition.

“I fell in love with fitness [after that competition.] It’s the one thing in life that shows immediate, tangible progress if you do or don’t put in effort. Not many things in life have instant gratification like that,” Jon Boles says.

His daily workout routine consists of about 60 to 90 minutes in the gym focusing on one or two muscle groups each day. Preferring quality to quantity, Jon Boles sticks with a medium amount of weights and high reps. He is intentional with every rep, moving slowly so that his body can react positively.

“I am extremely busy, but it is important to always make time for things that matter in your life,” he explains. “The gym centers me and keeps me on my true north. It doesn’t matter how much money or success one has – there are going to be times where I feel like a failure or not successful, but the gym is where I go to feel like I am on top of the world.”

Another important part of Jon Boles’ life is his community on social media. His purpose with every YouTube video or Instagram (@JonBoles) and Facebook post is to instill hope and inspiration to his followers. He motivates people to succeed both in the gym and in their personal lives.

“The message I want to portray to my followers is that you can literally do anything that you put your mind to. Nothing is out of reach if you truly want it, but wanting it isn’t good enough. You need to act on it,” he says.

Jon Boles has achieved more than most do in their entire lifetime, and he has done it all before his 30th birthday. But just because he’s ahead of the game doesn’t mean he is going to stop or slow down. The visionary entrepreneur has a few more things up his sleeve he’d like to accomplish, including fitness chain, Crunch Fitness, which will make its mark in Phoenix and surrounding areas soon.

“Nutrition and meal prep, supplements and a couple of other similar ventures are currently in the works,” he says. “Additionally, [I am] working on a reality television show involving myself and several close friends to showcase the internal struggles and successes of entrepreneurs in a prestigious city such as Scottsdale.”

Jon Boles: noun: an entrepreneur. His zeal for business is apparent with everything he touches, whether it is building a new brand or helping an existing one flourish. Success and fame are secondary. Jon Boles’ priority is to bring improvement to the lives of others.

“The thing I love most about being an entrepreneur is being able to create things out of thin air,” he explains. “Meaning that every brand I start, or client that [my team and I] work with, we are creating things for them that never existed before. Being able to help small businesses grow so that they can support their family more or bring on more employees makes me feel like we are playing a very small but important role in bettering the local economy.”

Interested in seeing what the team can do for your brand? Drop us an email at info@avintivmedia.com for a free consultation with “grow my brand” as the subject line.